My philosophy utilizes a gradual progressions system, which focuses first on technique, then movement, and eventually bringing the two together to create fluid motion. I make a point of learning my students’ personalities and interests. This allows me to use the right methods and examples to help them learn most efficiently.

I also believe firmly that my responsibility extends far beyond feeding balls. Good instruction is about building the steps to proper form and then testing that form with live and varied rallying and point-play. For my intermediate and advanced students, I also seek to develop strategies for successful competitive play, such as: short-term and long-term goal setting, point construction, point and opposition analysis, mental and physical preparedness, nutrition, and hydration.

Tennis is a beautiful and challenging game. It can be played for many reasons, at many levels, and with many strategies and game-styles. As a tennis professional, it is my job and my passion to help players achieve the level they desire by giving them the technical, physical, and mental skills required to become successful tennis players.

Growing up in the tennis town of Palm Springs, I spent a good portion of my adolescence out on the court, playing with friends and heading off to USTA tournaments on the weekends. In high school, I led Palm Springs High School to four straight CIF Division 2 appearances, was named to the Desert Valley all-league team each year,  and qualified for the CIF Individuals tournament and the Ojai Invitational three times each. Meanwhile, in tournament play I reached a Southern California 18 and under junior ranking of #85 and was ranked as high as #400 in the country for my recruiting class. In addition, I also received the SCTA Sportsmanship Award.

Recruited by several liberal arts colleges in Southern California, I joined the Redlands University men’s tennis program in fall of 2005. I was part of two NCAA Division Three playoff teams and our team was ranked as high as #7 in the nation in 2006 and #10 in 2007. From 2005-2008, I spent part of my summers coaching at Nike Tennis Camps at Claremont McKenna College, and it is there I discovered a passion for teaching the game of tennis. In spring of 2009, I received a B.A. in Political Science with minors in History and Physical Education.

During my time coaching Cate’s girls’ tennis we have advanced from Division 4 to Division 1. This team is the first to compete in the top division of any sport at Cate and our school has, by far, the smallest enrollment of any team in Division 1 of CIF.

At Laguna Blanca, the boys’ tennis team has gone from 1-11 the year before I began coaching to a perennial CIF playoff contender and one of the winningest teams on campus.

Students I have coached privately and within high school programs have gone on to compete at the D1, D3, and inter-mural collegiate levels, as well as achieve Southern California and National junior rankings. In 2017, Jackie and Carol Cai advanced to the Round-of-16 in CIF Doubles Individuals, making them one of the top teams in Southern California. This section is widely regarded as the most competitive in the entire United States.

Most importantly, my students have fun on the court and many times develop a love for the sport that will continue a lifetime. After all, tennis is a game! 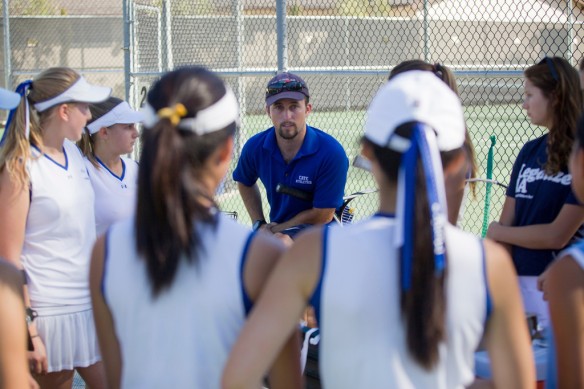