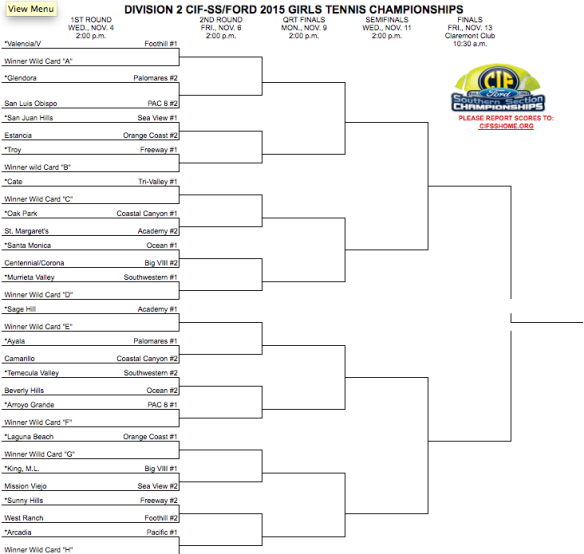 After going 13-1 during regular season play and dominating the Tri-Valley League Individuals Tournament, Cate has received the #5-seed in the CIF Team Playoff Tournament.

We begin our playoff tournament with a home match on Wednesday at 2pm, with the winner going on to play on Friday at 2pm. Our opponent will be the winner of a wildcard round between Trabuco Hills and Fullerton High.

Cate knows plenty about this, as last year we played Fullerton High in the same wildcard round, winning an 11-7 match. We went into the next round against the #2-seeded Murrieta Valley the next day, tired from our efforts, but put up a respectable 6-12 score.

This time around, we’ll have the opportunity to play the tired team at Cate. Should we win on Wednesday, the likely opponent for Friday would be Oak Park. We match up very evenly against them, so that could be a lot of fun! Then, based on seeded teams winning, we would earn a rematch against none other than Murrieta Valley.

First things first, and that’s the match on Wednesday. We’ve had a chance to de-stress a bit, as you’ll see below, but tomorrow’s practice will be all business. There’s plenty left in this season if we hit the courts with our best!

It’s my pleasure to have the opportunity to work with talented players who have NCAA aspirations. One such player is Julia Gan, who will be graduating from the Cate School in spring of 2016. Here is a showcase video, presented by Thorpe Tennis:

This last spring, I put it to my girls at Cate that the 2014 season would be different. After changing leagues during the off-season, we find ourselves competing against 2-time defending CIF D5 champion Carpinteria High, as well as perennial CIF D3 powerhouse Malibu High.

Now, one week into pre-season training, I can already see that the girls are fitter and better prepared for the challenges ahead. As a result, we’ve been able to do several hours of practice each day and a good amount of conditioning. Here’s some video from a new Cate girls’ tennis tradition…the team run! 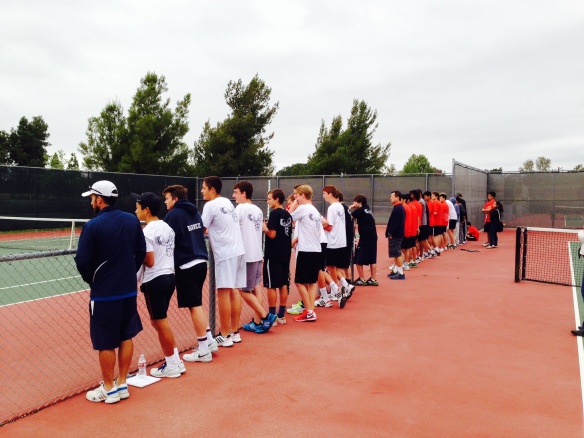 Laguna Blanca boys’ tennis won again, bringing our win-streak to three and our overall record to 8-4.

Laguna was led by Ben Furukawa and Phillip Hicks in singles, with both picking up sweeps. In doubles, Henry Farrell/Martin Barnick swept their matches at #2 and Tristan Prinz/Kylan Tyng made quick work of their two opponents before being subbed out in the third round of play.

Our next match will be at division rival Santa Ynez on Tuesday, April 22nd. Last year, we played a very close match during the regular season, falling 8-10, and then blew a 4-1 lead in the second round of CIF Playoffs to fall 12-6.

Come out and show your support as we look to make amends for last year and even if you can’t make it out, be sure to follow our results here on ThorpeTennis.com!

I have been working with Tristan Prinz for almost three years now and he’s getting to a really nice level at this point. He’s been on a roll in practice of late, and looks ready to make a big jump this year in high school play.

Here is some baseline rallying we’ve been doing to get him in rhythm and improve his court fitness. This video is also a great way to compare righty and lefty strokes, as I will be in the foreground a bit in the beginning before Tristan moves to that position.