Year #4 is in the books over at Laguna Blanca Summer Tennis Camp and I am proud to report another excellent week of tennis.

A dozen campers, three celebrity players, and your camp coaching staff enjoyed warm but pleasant conditions at Furukawa Tennis Gardens, with a smattering of fog to provide some sun relief.

During the week, we worked on becoming confident in tie-break situations, learned the high school format scoring system, and did many of the drills that have guided Laguna Blanca Boys’ Tennis to a 62-19 record over the last five seasons.

In the week-long team competition, Team Berkshire Hathaway held a steady lead throughout the week, although Team LaJuJuMaHaBen made a final day push to make the final score a very close 13-12 win for what we can only assume would be the Oracle of Omaha’s favorite pick for top tennis team.

While all campers exhibited good sportsmanship and drive throughout the week, several stood out as being worthy of our end-of-camp awards. Jake Gidney was the unanimous pick for “Coaches’ Award”, bestowed upon the camper that best embodied the characteristics desired in a player by coaches. Jack Connor snagged the “Most Improved” honors, transitioning from squash phenom to competitive tennis player in one week flat. Finally, the “Most Valuable Player” title went to Luke Williams, who showed himself not only to be the strongest player at camp, but also to be a great leader and teammate.

Thanks go to Laguna Blanca School for allowing me to host this event at Furukawa Tennis Gardens; to Tristan Prinz who has been a coach at each of the four editions of this camp; to Henry Farrell for stepping up from “celeb player” to coach in the summer before he departs for Harvard University; and to Jason Barnick, Atty Roddick, and Andrew Tolles for the volunteer work as this year’s celebrity players.

And of course, I want to thank our campers and camp parents for putting your faith in me to produce a fun and engaging tennis camp! 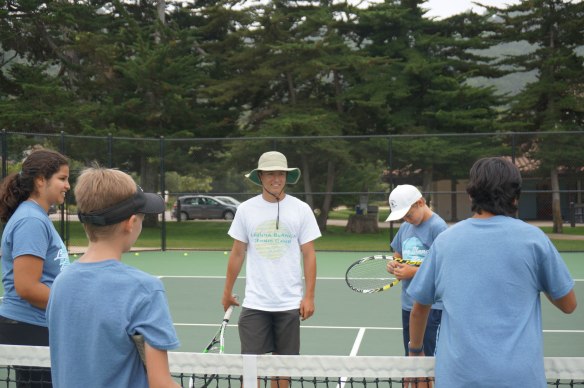 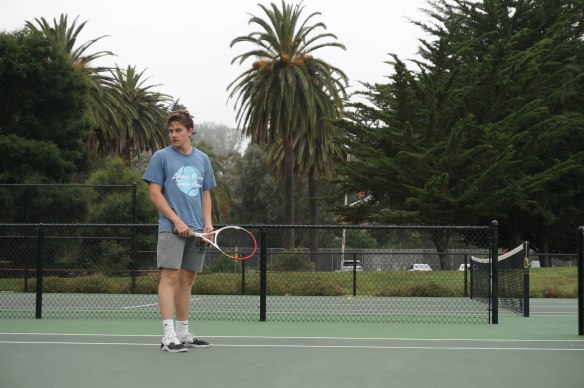 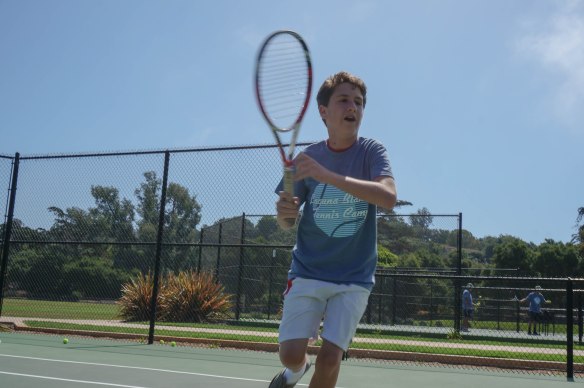 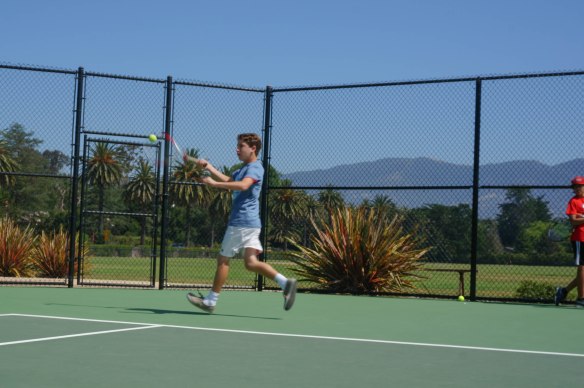 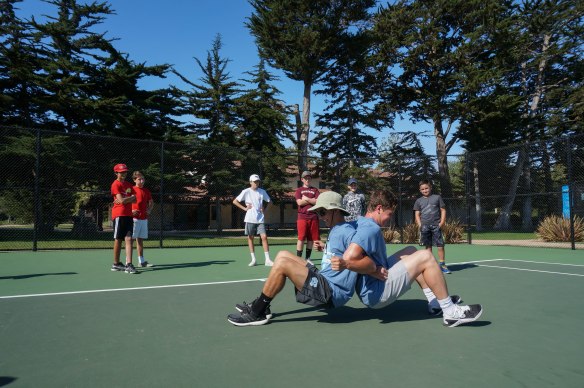 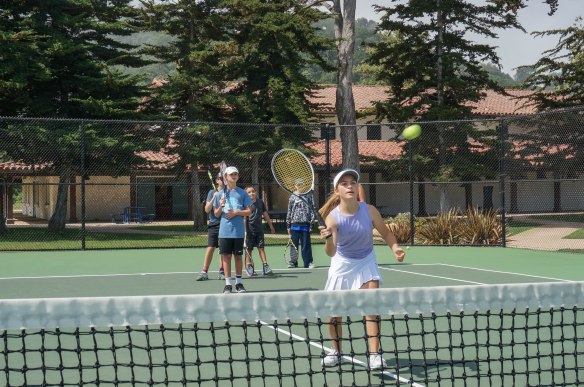 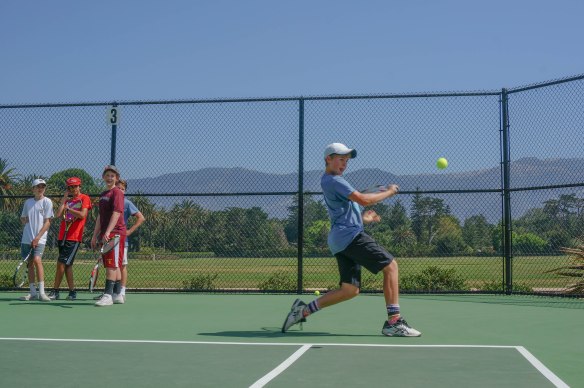 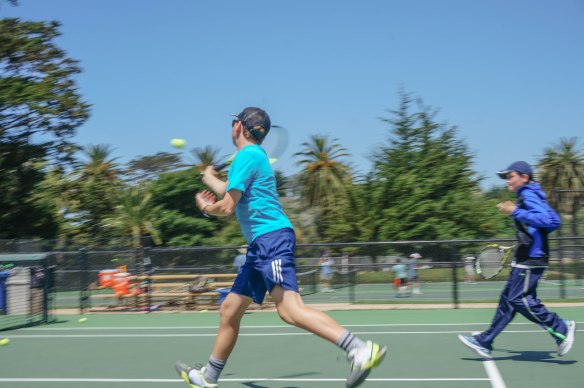 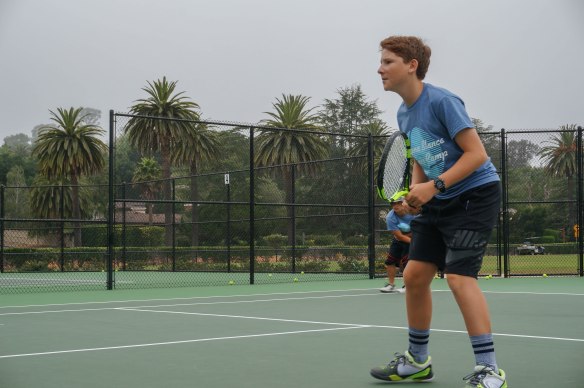 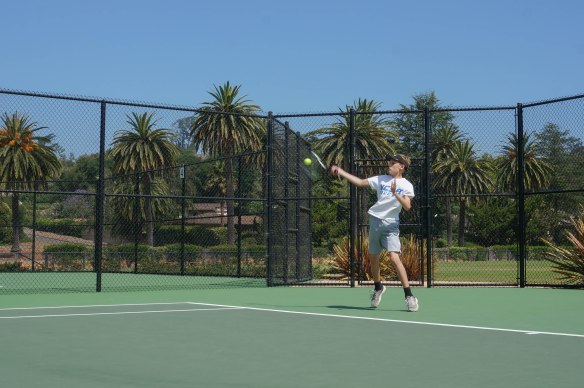 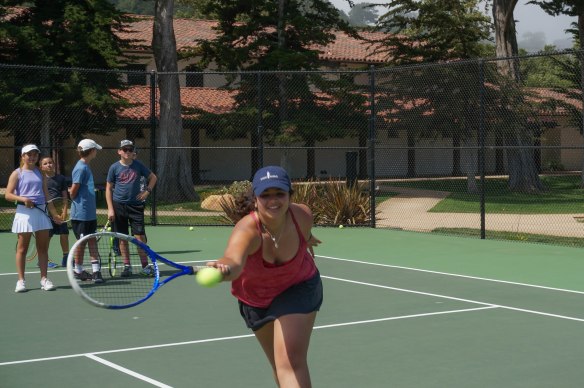 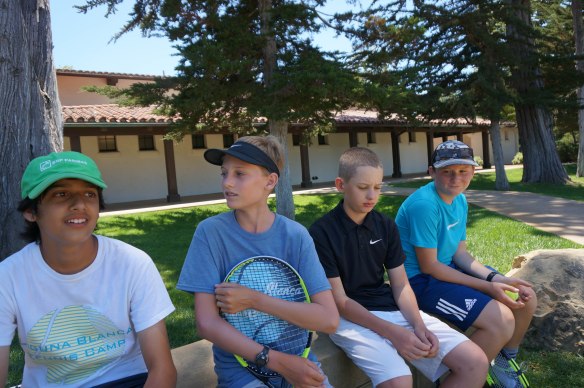 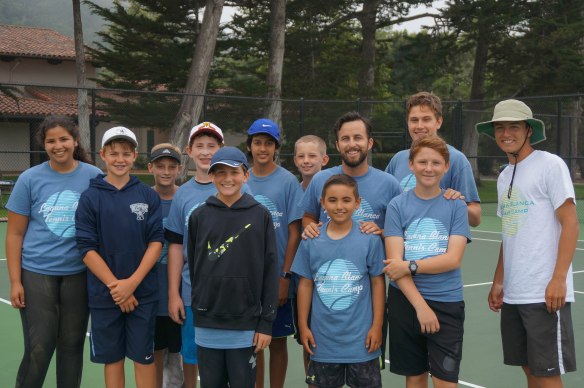 Today, we completed the third edition of the Laguna Blanca Tennis Camp in beautiful Santa Barbara and I’m proud to report a successful week. With 14 awesome campers, 5 celebrity players, 3 legendary coaches + yours truly, how could we go wrong?

Over the last five days we’ve prepared campers to make the jump from junior tennis to the high school format and learned some other important lessons, too: END_OF_DOCUMENT_TOKEN_TO_BE_REPLACED

Two days are done and dusted and I think we can all agree that today’s drop in temperature was a welcome respite (relatively, at least). Yesterday’s session featured an emphasis on the ins and outs of tie-breakers and the outsize role they can play in determining a match.

We also split into teams that will be competing for “Owl Points” throughout the remainder of camp. Coach Tristan’s team selected “Team Panda” while Coach Phillip Hick’s players used bits of his name to form the name “Team Phix.” The first Owl Point was awarded to Team Phix for most creative name, but Team Panda responded immediately with a win in the team serving competition by the narrowest of margins. END_OF_DOCUMENT_TOKEN_TO_BE_REPLACED

On Thursday, we had the opportunity to learn from another highly decorated tennis player in Sara Scott. After a four-year turn at the #1 singles position for UCLA, Sara went on to be ranked as high as #400 in the world during her professional tennis career. She is a self-identified “aggressive baseliner,” and so her court was all about weight-transfer and driving through groundstrokes. After saying goodbye to Sara, we enjoyed a meal from Backyard Bowls before heading out for some more match-play in the afternoon.

During the last two days of camp, there was a dramatic shift in the Owl Points week-long competition, with Team Fresh 2.0 dominating the abbreviated format match-play in the afternoon and then fielding the top two doubles teams in the Friday morning doubles tournament. Coming from down 13-8, Team Fresh 2.0 ended up winning the competition 26-22.

Individual honors for the camp went to Taylor Kleine and Luke Williams, both of whom were models of competitive drive and sportsmanship.

Taylor won a number of doubles matches with different partners throughout the week and helped make the difference for his team on the last two days, going undefeated in singles and doubles play, earning himself MVP honors. Luke was our Coaches’ Award recipient, in part because of his strong play throughout the week, but even more so because he was a go-getter. Luke was ready to be challenged and to compete every day and was a total class-act in victory or defeat.

Harrison Fell and Ben Newton put on a spirited hat competition all week, something that has become a sort of tradition at Laguna Blanca Summer Tennis Camp. Who will be top hat next year?

We ended the camp with our customary pizza party and then moved on to the team award. As part of the team competition, the winning team got to take a photo with their coach in the owl suit, and despite protests from the losing coach, Tristan and I lined up for one round of “butts up,” during which not a single camper dealt a glancing blow. Luckily for us, not even coach Ben hit his mark. Maybe next time, guys! 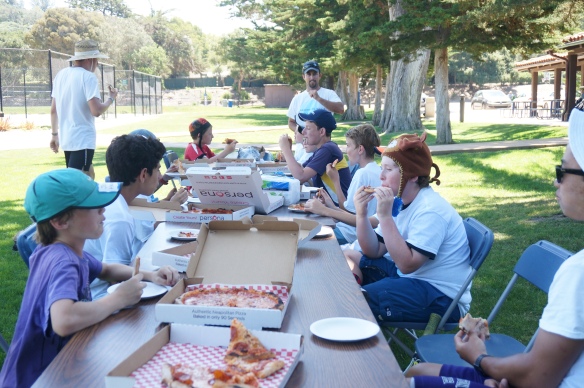 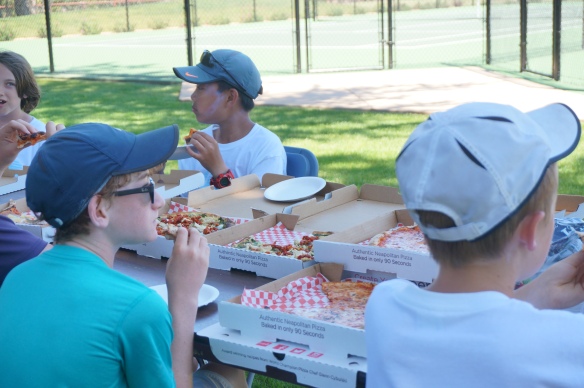 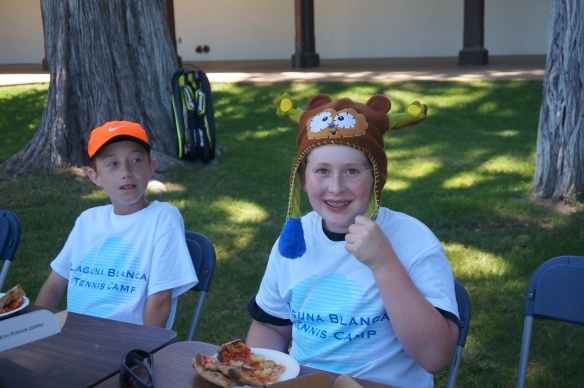 On behalf of my staff, I ‘d like to thank all the campers, celebrity coaches and celebrity players that participated in our second Laguna Blanca Summer Tennis Camp. We’ll see you next year! 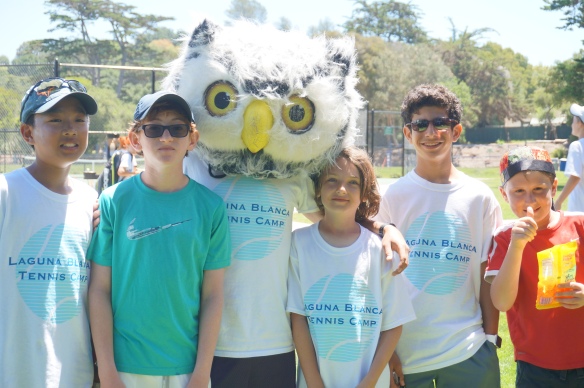 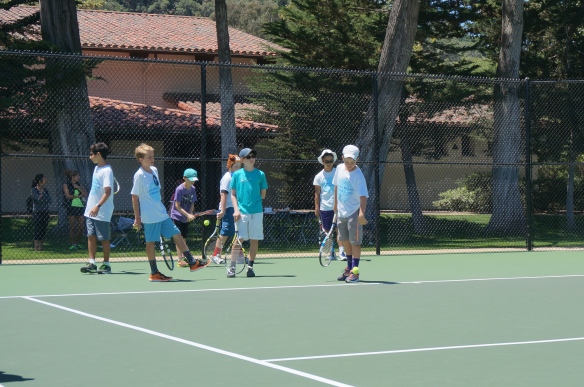 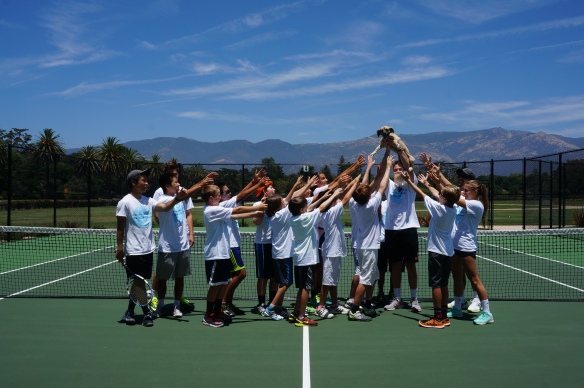 In an interview following the day’s events, in which Team Anti-Fresh swept the point-earning opportunities to go up 8-2, Coach Ben of Team Fresh was quoted as saying, “I’m not worried.” When pressed on the matter, Coach Ben explained that his team was conserving its resources in order to make a final push during the last two days of camp. Coach Tristan declined to comment for reporters about his team’s dominance thus far, but it is widely held that the presence of his dog Boo at today’s camp may have made the difference for Team Anti-Fresh.

In reality, today’s Owl Points were earned by the narrowest of margins. Team Anti-Fresh won the early-morning footwork relay race by one stride and followed up with a narrow victory in Around-The-World just before lunch-time.

In the afternoon, Team Fresh battled back from a 5-9 deficit in sets to reach 8-9 before succumbing 6-3 in the final set of our high school format dual match.

Then, during DJ Conrad’s guest music set, everything was up for grabs until the last possible moment, with the mini-tennis tournament points changing hands in the ninth and final round of the day.

Here are some photos of the day’s action: 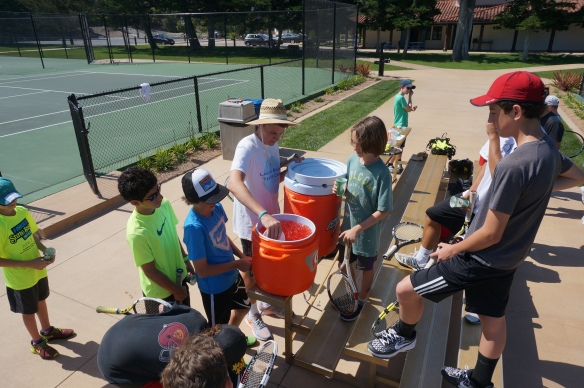 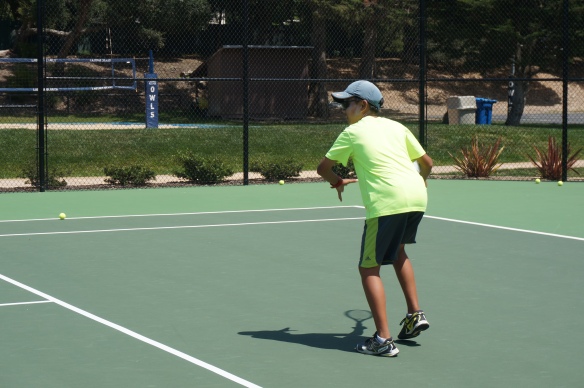 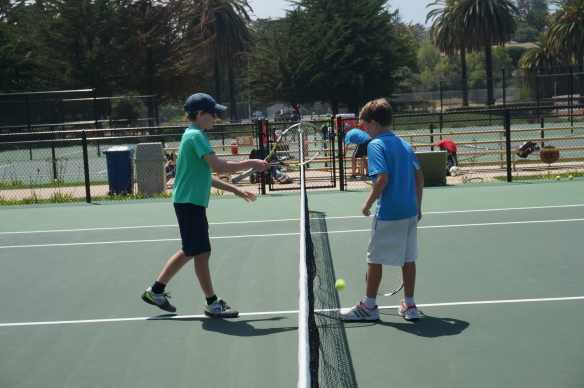 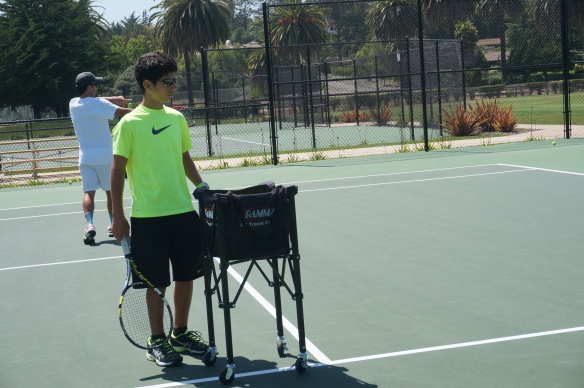 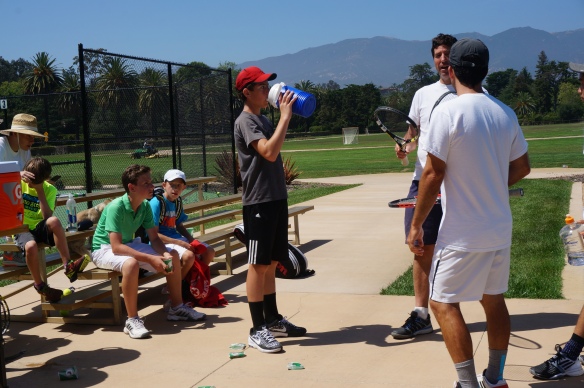 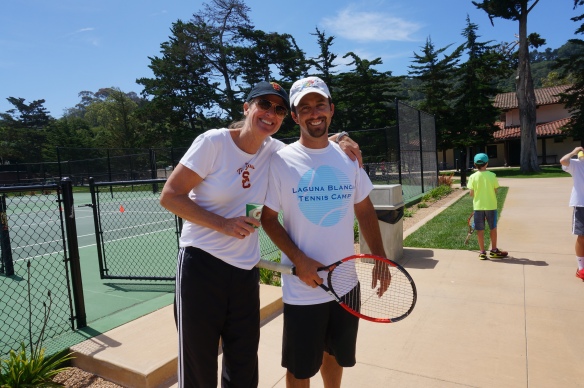 Anti-Fresh has taken a 6-4 lead in the first of two dual matches to be held this week. The match will be completed tomorrow afternoon to break the 2-2 tie in the week-long competition for Owl Points.

In the morning, Team Fresh 2.0 put in a dominant performance untangling themselves from “the human knot” to take a 2-1 lead, but Team Anti-Fresh countered with a win during the footwork relay race.

During the early-day court rotations, we had the pleasure of welcoming celebrity coach Barbara Hallquist Degroot, arguably the most successful female player in USC history. After becoming the first female athlete at University of Southern California to receive a scholarship, Barbara went on to lead USC to four consecutive national titles, and another as a coach several years later.

After her stellar college career, Degroot went on to reach #30 in the world after a quarterfinal performance in the US Open. She also reached the quarters twice as a doubles player.

Needless to say, the slice and touch-volley court featured a very talented and experienced celebrity coach today. I had the pleasure of coaching with her at Cate School for five seasons so it was great to be on the court with her again! END_OF_DOCUMENT_TOKEN_TO_BE_REPLACED

Day one is done and dusted, and what a day it was! Talking with our returning coaches Ben and Tristan while setting up this morning, we were all excited to reunite with our returning campers (Laguna campers are the best), but we also enjoyed welcoming some new players into the fold. END_OF_DOCUMENT_TOKEN_TO_BE_REPLACED 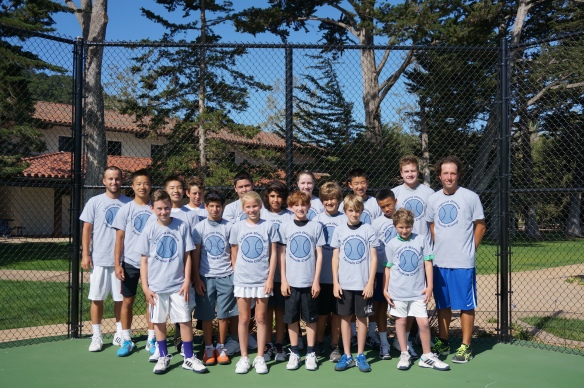 We are now three days into our inaugural camp and already it seems we’ve been together for weeks! The camp has been a pleasure for the coaching staff to put on and we feel the campers have been enjoying themselves as well. Here are a few photos of what we’ve been up to: END_OF_DOCUMENT_TOKEN_TO_BE_REPLACED