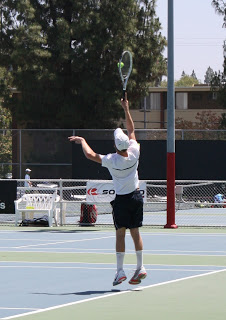 Well, it’s been another successful week for Thorpe Tennis. The weather was warm and some played quite a few matches in the Braemar Satellite one-weekend tournament. By the end of the weekend, the group was able to bring home the runner-up trophy in the Boys’ 14’s age-group, and the champions’ trophy in Boys’ 16’s doubles. Here’s how it happend:
On Friday evening, Ben Furukawa started off the weekend with a three-set victory in the 16’s age-group, followed closely by a 6-0, 6-0 win from Tristan Prinz in the 14’s. Alex Shirokow-Louden also had a strong win in the 16’s age-group. Eddie Conk, playing in his first tournament in years, drew a seed in the first round and struggled to find his usual form under tournament conditions, but took a philosophical approach to the match and now looks to improve his groundstroke fluidity before the next tournament. 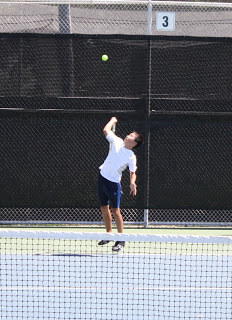 Play on Saturday began bright and early with a quick win from Prinz and another three-set victory from Furukawa. Shirokow-Louden nearly pulled off an upset against a strong player, winning the first set and holding two match-points before losing his Round of 16 match in the third set. Shirokow-Louden was playing in his first tournament, and though the loss was frustrating, he was happy to have the experience under his belt and now looks forward to several tournaments in July. Later in the day, Ben Furukawa ran up against stiff competition, but Tristan Prinz dismissed his quarterfinal opponent in short order before the two combined for a doubles win in the boys’ 16’s.
On the final day of play, Prinz opened up with a fine performance against a strong opponent. Play was tight, but Prinz gave no ground and eventually won several close games to finish out the first set and demoralize his opponent. In the second set, Prinz continued to break down his opponents game and took the second set 6-1, earning himself a berth in the Finals. 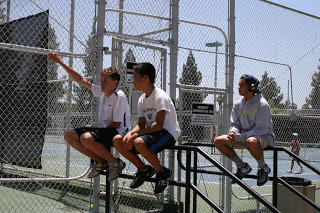 The Boys’ 14’s Final was played with great intensity and by the end of the first set, the fatigue of six matches in 48 hours was beginning to take its toll on Prinz. After losing the first set 6-3 and falling behind in the second, he made one last go at leveling the match, reaching 4-4 before succumbing to exhaustion and a strong opponent in the heat of the day. There would be retribution, however, as Prinz and Furukawa teamed up to win the Boys’ 16’s Doubles Final by a score of 6-1, 6-2.

Thorpe Tennis will next be in action at the Jack Kramer Northridge tournament July 11th-15th.