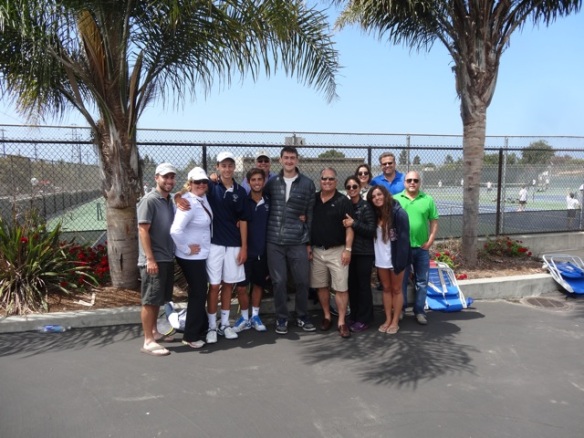 After beating a very strong Westminster team in the first round of the playoffs, the Owls came up short against Santa Ynez, despite holding a 4-2 lead after the first round. It’s clear that we got a terrible draw, with Santa Ynez going on to play the closest match against JW North, the dominant CIF champions. Even in the first round, the Westminster coach explained that they’d gone to a 9-9 tie with Estancia earlier in the season and that team was seeded fourth in the tournament. Still, for a team that hadn’t made the playoffs in 9 years, it was a big step forward.

In individuals, Ben Furukawa got runner-up in the Condor League Championships, losing a tight bout with Jason Xiao from Cate. In doubles, Benji Sorensen and Eddie Conk completed their senior year as Condor League doubles champions. All three went on to compete in CIF individuals, where Ben drew a tough first-round opponent but made him work for it and Benji/Eddie got a win before running into a D1 buzz-saw team of Calabasas High singles players.

There’s no doubt that we will have to continue to prove that we have become a top-tier team in order to garner Ojai invitations and receive a decent team playoff draw, but for now we’ve got to be happy with the way we played. I’ll also be looking to add more high-quality D4 opponents to our regular season schedule so that seeding us becomes easier for CIF to figure out. Everyone seems excited to get back to training and prepare for next season, so we’ll be ready to make them give us a good, hard look.