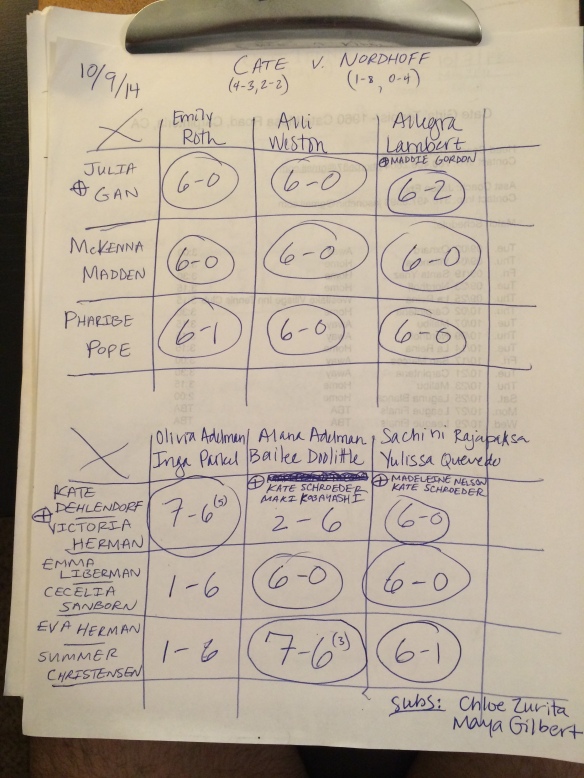 Cate was again dominant against Tri-Valley League opponent Nordhoff High School, winning by the familiar score of 15-3. The Rams (now 5-3 overall, 3-2 in TVL) have scored 15-3 in all five of their wins to date.

Julia Gan, McKenna Madden, and Pharibe Pope won all of their sets, with Maddie Gordon subbing in for Gan in the third round to complete the sweep. Singles dropped only three games in route to nine wins.

In doubles, Cate led off with a sweep of the first round, punctuated by a 7-5 tie-break win from senior captains Kate Dehlendorf and Victoria Herman.

The doubles combinations of Emma Liberman/Cecelia Sanborn and Eva Herman/Summer Christensen added two wins each, although both struggled against the tough play of Nordhoff’s number one doubles team. Olivia Adelman and Inga Parkel of Nordhoff High won the Frontier League doubles individuals tournament last year, qualifying them for CIF individuals, it it was clear that they make a good team.

Cate begins a tough 8-day stretch of play next Tuesday when they take on La Reina High, who are currently undefeated in TVL play. Then, on Friday the girls will play a CIF D1 opponent in San Marcos High, before finishing the difficult period the following Tuesday (10/21) against Carpinteria High.