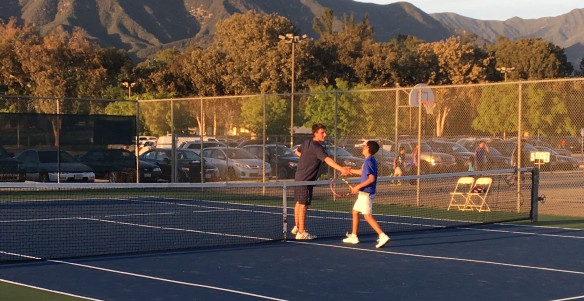 Laguna bounced back from yesterday’s loss with a resounding 13-5 win over Nordhoff High School at their courts in Ojai. The Rangers are currently ranked #10 in CIF D5 and are the defending Frontier League Champions.

Nordhoff picked up three sets from their top player, who attends Weil tennis academy and is currently ranked #554 in the country, but the Owls still won the day in singles play. Alex Furukawa, Andrew Tolles, and Phillip Hicks all took two-of-three sets to pick up the remaining six in singles.

Doubles was much the same, with Laguna sweeping their #2 and #3 opponents, but struggling against the Ranger’s #1 team. Only sophomore pairing Jason Barnick and Victor Liu were able to register a doubles sweep at the #1 spot.

Kylan Tyng moved back into doubles today, partnering with Jack Stein for the first time. The pair quickly found their groove, playing very consistently and letting their opponents make the mistakes, translating to two set wins on the day. Connor Scheinberg also returned to play after missing several matches due to injury, teaming with Atty Roddick for two wins.

In between sets, shade from the Ojai heat was sought out by any means available…

It’s been a pretty successful first few weeks of the season for Laguna Blanca tennis. In the next week, we’ll play some of our biggest rivals, including Rio Mesa on Thursday and Santa Ynez on Monday.

Rio beat us 13-5 last season, but we’ll be looking to turn the series back to our advantage, after having won the previous two meetings. Santa Ynez is a team we have never actually beaten. For each of the last six seasons, they’ve been ranked one of the top teams in D4, but I feel strongly that our time has come. We’ll need to play better than we have so far this season, but I think we have the capability to add both of these matches to the win column.

In the meantime, here’s a quick recap of the last few matches:

Laguna v. St. Bonaventure, 18-0 – All Laguna, all the way. Fourteen players from our side earned wins in this match and Alex Furukawa won three sets without dropping a game.

Laguna @ Carpinteria, 13-5 – Despite a slow start in the first round (3-3 tie), Laguna rallied to cruise past the Warriors. Phillip Hicks swepts with ease in singles against some tricky opponents and Kylan Tyng stepped up to the singles lineup to win 2-of-3. In doubles, Atty Roddick and Andrew Tolles swept their sets 6-2, 7-5, 6-1.

Laguna v. Foothill Tech, 11-7 – Laguna went up 10-2 after the first two rounds, before substituting heavily. Alex Furukawa and Phillip Hicks moved to a 19-1 overall record at #1 and #2 singles.

Laguna @ Pacifica, 8-10 – Our first loss of the season came while missing #1 singles player Phillip Hicks and Conor Scheinberg, who has been a key to our doubles success. Alex Furukawa and Andrew Tolles stepped up big-time, sweeping their singles sets, including wins over a strong #1 singles player from Pacifica. In doubles, we came out flat, getting blanked in the first round, and though we rallied for two wins in the second, that was all we would take on the doubles side.