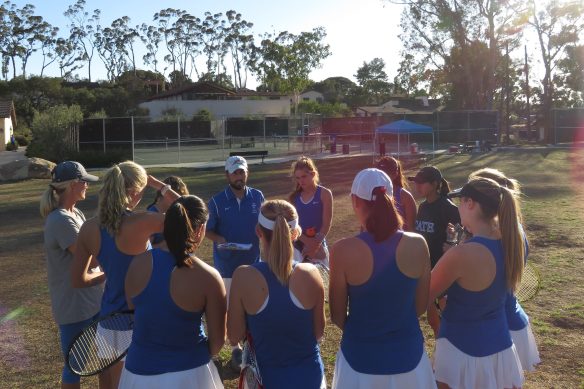 The #4-seeded Cate girls’ tennis team moved to 11-1 on the season with an empathic victory today over Oak Park. The first-round playoff match was played at the Cate School in Carpinteria.

Singles play was led by Grace Fuss and Jackie Cai, who both swept their three sets, including wins over Sylvie Van Cott, a strong player who just last year was ranked in the top-300 in the US for her class. Sophomore Sydney Burton also put in an impressive performance to add two sets on the day.

Doubles was much the same as singles, with Cate dominating at the top two positions. Summer Christensen and Sarah Polowczak moved to 26-0 in team matches this year with a 6-4, 6-1, 6-0 sweep and the combination of Eva Herman/Janice Ng won two sets before being subbed out in the third round. Carol Cai and Katherine Grossman had a tough start, losing to the #3 Oak Park team, before recording impressive 6-1 victories in each of the next two rounds.

We came out nervous; I think we were down on 4 courts early on in the first set. Despite the slow start, we managed to snag four sets in the first round and never looked back. I’m proud of the way we got better and better throughout the match. Hopefully the playoff jitters are out and we can get off to a better start in the next match, but overall, we’re playing great tennis.

Cate will play Desert Valley League Champs Xavier Prep in the Round of 16 on Friday. The match involves a 4+ hour drive for Cate, who lost the home/away coin-flip. The match will be played at 1pm at Indian Wells Tennis Garden, host of the BNP Paribas professional tournament.

This is a great opportunity for our girls to compete at a high level and at a world-class venue. The drive will be tough, but we’re ready for the challenge. I grew up in Palm Springs and have played on those courts many times, so we’ll be ready for the slower court surface and other adjustments we need to make to be successful against Xavier.