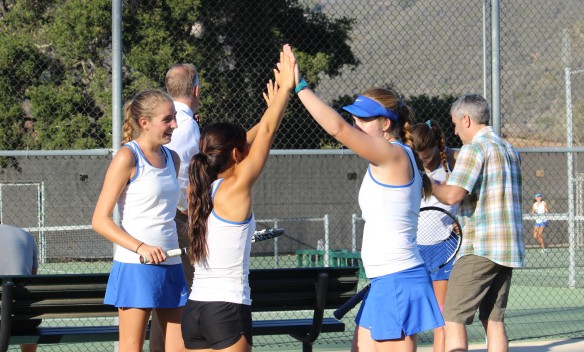 In a comprehensive victory that featured wins from all 13 members of the 2014 girls’ tennis team, Cate put the hurt on Laguna Blanca, despite their impressive 11-3 record.

Singles was led by junior Julia Gan, who was dominant as usual (6-1, 6-0, 6-1) and junior McKenna Madden returned to the singles lineup to pick up three wins as well (7-5, 6-3, 6-0). Senior Pharibe Pope added wins against Laguna’s Libby Hasse and MacKenzie Kinsella.

Doubles was a clean sweep for the home team. Senior captains Kate Dehlendorf/Victoria Herman cruised to 6-0, 6-3 victories, before being replaces by seniors Maddie Gordon/Kate Schroeder, who played some of their best tennis of the season to record a 6-1 victory.

Summer Christensen, who has been showing some real form of late, partnered with Eva Herman for two fine victories at the #2 spot (6-2, 6-0), and then a third with new partner Madeleine Nelson (6-1).

Emma Liberman and Maki Kobayashi got off to an uneven start at #3 doubles, having never played together, but rallied for a 6-4 victory in the first round. In the second round, they picked up steam, receiving a 6-0 victory before usual partner Cecelia Sanborn took Kobayashi’s place in the third round. Liberman and Sanborn picked up the final doubles win of the match by a 6-2 score, clinching the doubles sweep.

Cate finishes regular season play 8-5 (4-4 in TVL) and awaits a CIF Playoffs assignment. In the meantime, Julia Gan/McKenna Madden will partner up and join Kate Dehlendorf/Victoria Herman in bringing a strong doubles contingency to TVL league individuals. Pharibe Pope and Eva Herman will represent Cate in singles. The top two singles players and doubles teams at TVL individuals with gain entry into CIF Individuals later this month. TVL Individuals begins play Monday, 1pm at Carpinteria High School, with the finals to be played on Wednesday. 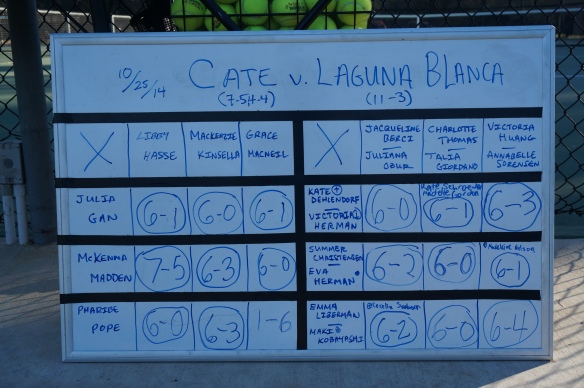