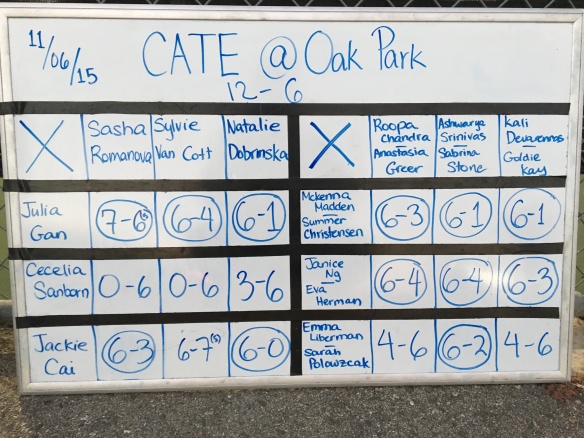 Cate has taken a 12-6 victory in Oak Park this afternoon and now advances to the CIF D2 quarterfinal round.

In singles, Julia Gan swept, beating two very high-level tournament players in Sasha Romanova and Sylvie Van Cott. Jackie Cai also came up with a big win over Romanova and played Van Cott to a tie-breaker in the final round. Cai finished 2-1 on the day.

Perhaps the most crucial moment of the match was Gan’s first-round win over Romanova, which was taken in a tie-breaker, 7-5. I think that win put Oak Park off-balance, because they’re used to sweeps from Romanova and Van Cott. It was pretty clear that Romanova was shaken from the first set while playing Cai, who ended up winning her set against the Oak Park #1, too.

I’ve seen it a number of times over the years. When Julia beats a strong player, her relentless style and physicality really wears down the opponent. We’re calling it “the Julia effect.” Sometimes, that gives our other singles players the edge they need to win, too. Jackie did just that, playing some of her best tennis to beat Romanova in the second round.

This win affirms the seeding committee’s decision to rank Cate #5 in the division, despite not being ranked in the top-10 until the final week of the season. Cate, a school of less than 300 students, has continuously faced, and defeated, schools much larger in size throughout the season. Oak Park has a student-population of 1,500 and Trabuco Hills (first round opponent) has 2,100 students.

We may not have as many students to work with, but we have an increasingly dedicated group of girls that have been laying it on the line against every opponent, regardless of school-size. At first, we were frustrated to be moved from division four to division two last year, but the truth is, it has really spurred our development. The bar was set high and I’m so proud of the way our girls have responded to meet that challenge.

This attitude will be important going forward, as Cate will face the winner of Murrieta Valley and Santa Monica High School (2,700 and 3,000 students, respectively). You know what they say…it’s not the size of the Ram, it’s the size of the fight in the Ram that counts!