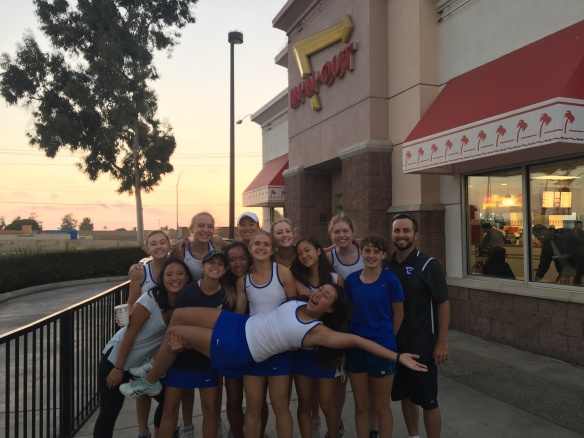 Yesterday afternoon, Cate Girls’ Tennis opened the 2016 season with a 13-5 win over Rio Mesa High School. It was the first win of the season and also the first step to defending our position as CIF Division 2’s top-ranked team!

It has always been a challenge to be in top form in the first match back from outings week, and this year was no different. What allowed us to take the victory is a tradition, a culture that we have established: Cate Tennis loves to compete. Our singles players are all willing and ready to grind out three hard-fought sets and our doubles teams rarely miss an opportunity to be aggressive at net. I could clearly see the difference between our practices this week and the way we performed in the match.

In singles, our girls faced a tough opponent at the #1-spot in Jupneet Singh, who is currently ranked #217 in the country for her class. Losing to her did nothing to shake Grace Fuss and Jackie Cai in their other matches, which they won convincingly. Annie Lu also came off her match against Singh with a philosophical approach, saying she had taken the opportunity to work on some adjustments to her serve.

The doubles lineup recorded a 9-0 sweep, with only one close match in the first round of play. A new partnership between senior Summer Christensen and freshman Carol Cai managed the pressure of the #1 position, taking a convincing tie-break win over the opposing #1’s and then cruising in the following two rounds.

Senior Eva Herman and junior Janice Ng picked up right where they left off at the #2 position, at which they had so much success in the 2015 campaign as members of the Tri-Valley All-League First Team. The pair dropped just one game in each set.

As for our position in the first CIF poll of the season as #1 team in our division, we are resolute in our intention to defend that title as best we can, but the first priority of our team will be to continue the traditions of our team that earned that title. A query of our returning players during pre-season yielded three key elements to our core identity as a team:

Cate Girls’ Tennis plays again next week on Wednesday and Thursday. Both matches are away at 3:30pm, with Santa Ynez (#2 in CIF D2) and then Thacher (current CIF D5 champions) providing for an intense and challenging week of competition.

I want to encourage parents and other interested parties to come out and support us as we embark on another fruitful journey together, and for those of you who can’t be there in person, I will do my best to keep you in the loop right here!

1 thought on “Traditions and Titles: The Beginning of Another Cate Girls’ Tennis Season”