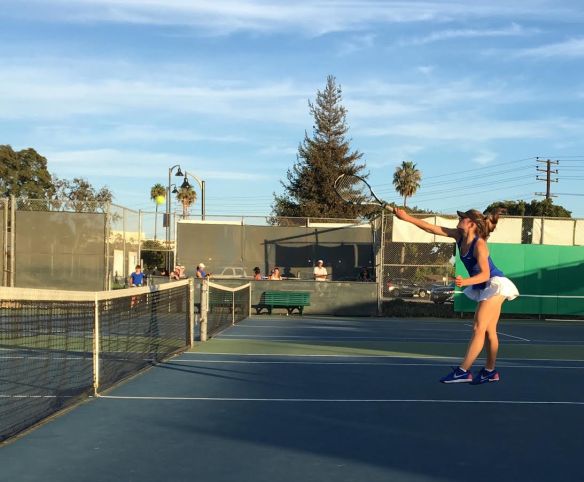 Fourteen Cate students played in a 15-3 victory over Foothill Tech at Ventura College today. The win moves the team to 7-0 in Tri-Valley League play and 9-1 overall.

In singles, sophomore Sarah Polowczak moved up from the doubles lineup to sweep her three sets of play (6-0, 6-2, 7-5), including an impressive recovery after being down 1-4 in the final round. Freshman Grace Fuss added 6-0 wins in both of her sets on the day and Janice Ng and Kate Tunnell each added a win of their own.

Cate doubles was led by the Cai sisters (Jackie and Carol), who move to 5-0 on the season playing together. Summer Christensen and Eva Herman partnered for the first time this season to record two wins as well, before being substituted. Sophomore Sydney Burton and senior Katherine Grossman also picked up a win in the first round of play.

In third round substitutions, Maki Kobayashi and Sydney Burton partnered to take a tie-break set (7-1) and Annie Lu played her best tennis in four years at Cate to defeat Foothill’s #2 singles player 6-3.

In today’s CIF poll, Cate remained #3 in D2 and has a chance on Friday to complete an undefeated season in Tri-Valley League play. The feat would match last year’s result in league play and make two years running that Cate has lost just a single match during the course of the season (San Marcos, a D1 program). Cate will host Carpinteria at 2:30pm and the match will coincide with Cate’s parents’ weekend.

It cannot go unmentioned that senior Summer Christensen, who is still undefeated on the season, has been named the Santa Barbara Athletic Round Table Scholar-Athlete of the year for Cate School. This award is given to one athlete per school each year and Summer is a very worthy recipient and a great representative for our team and the school at-large!