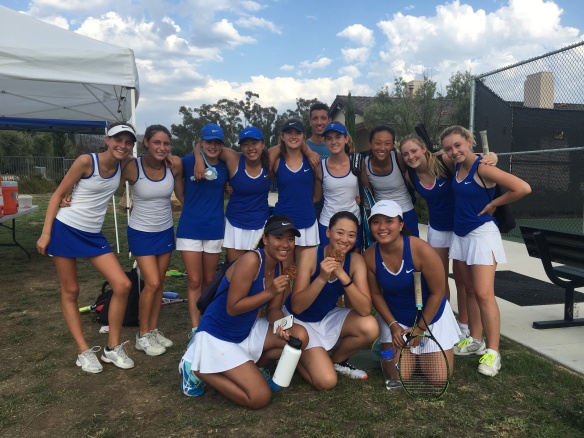 It’s been a whirlwind early-season. With our first match just one practice after fall tryouts, and then a 10-day break for outings trips, it would be easy to forgive a shortfall in performance. That has not been the case, as Cate moves to 4-0 on the season.

In the first match of the season, Cate came out swinging with all 12 players on the varsity squad earning at least one set win. Grace Fuss and Carol Cai both went 2-1 on the day in singles.

In doubles, Jackie Cai and Sarah Polowczak were absolutely dominant at the #1 position in the first two rounds, and Polowczak partnered with freshman Fritze Mayer to collect a third set win as well.

For a second time in the young season, all 12 Cate players recorded victories in the match. The senior/freshman combo of Janice Ng and Fritze Mayer was particularly impressive, winning their sets 6-0, 6-0, 6-1.

Maki Kobayashi and Piper Brooks partnered to complete another sweep, winning their sets 6-4, 6-1, 6-1.

The closeness of the final score does little to show how dominant the Cate girls were in all the important moments. Each of the first two rounds-of-play went 5-1 in favor of Cate, meaning the match was clinched before the third round even began. This is particularly impressive considering Santa Barbara High was previously undefeated (5-0) and ranked #9 in CIF D2.

Grace Fuss played some very intelligent tennis in the first round, leaning on her match-experience to get through the early part of the set and then building into some of her better tennis of the young season to close out Claire Stotts, the SB #1 player.

Jackie Cai also played the early part of her first round match without her full capabilities, missing that confidence from the baseline. However, at 3-5 down, Cai’s mental toughness took over and she rattled off four consecutive games to take the set over Santa Barbara’s Eva Kershner.

For the third time in five matches, every varsity player scored a set-win for Cate girls’ tennis in what was a comprehensive win over the #7-ranked team in CIF Division 3.

Sydney Burton was particularly impressive, displaying the progress she has made since the end of last season in recording a 6-2, 6-0, 6-0 sweep of Carpinteria’s singles lineup. Grace Fuss had no trouble doing the same. Janice Ng and Jennifer Soh each added a win to make it 8-of-9 in singles.

The doubles lineup featured three new doubles pairings that all performed as though they had been playing together the entirety of the season. Jackie Cai and Fritze Mayer led the line with a sweep at #1 doubles (6-1, 6-0, 6-1).

Cate will face two key rivals next week, with an away match at Thacher on Tuesday followed by a home match against La Reina on Thursday. Both matches will begin at 3:30pm.