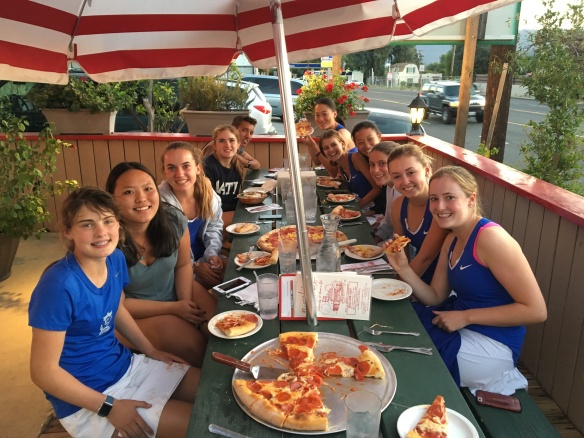 Cate has come out a 13-5 winner in a match contested by two undefeated teams. Thacher is last year’s CIF D4 playoff champion, while Cate is coming off two consecutive D2 quarterfinal appearances. The teams finished second and first (respectively) in last year’s Tri-Valley League and both came into the match 4-0 on the season.

Cate opened the match, held in Ojai at Thacher, by rifling off wins on five-of-six courts in the first round. The lone loss came at the #3 singles position, where Sydney Burton struggled against an unorthodox player. Burton would go on to show her true level with wins over the Thacher #1 and #2 players in the remaining rounds.

It was all business for the Cai sisters, with Jackie winning her two singles rounds 6-1, 6-0 and Carol partnering with Sarah Polowczak to win 6-1, 6-0. Polowczack continued her regular season unbeaten streak in the third round, partnering with Jennifer Soh for a 6-0 victory, which brings her tally to a remarkable 50-0 over the last two seasons.

We always look forward to the classic Cate/Thacher tennis rivalry, which has been going strong for decades. Last season we really took it to them in our first meeting after having not played them for a few seasons, and I asked the girls to bring that same intensity; I was not disappointed.

While we still have some improvements to make, I thought we executed our doubles strategies pretty effectively and our singles players were absolutely rock-solid.

As Thacher has already beaten La Reina and Malibu, we knew they were our biggest challenger for the Tri-Valley League, so it’s good to see where we stand with them. We’re not going to take the foot off the gas-pedal though and we’re very excited to play La Reina on Thursday at Cate.

For now though, there is time to enjoy the left-overs from a Boccali’s celebratory dinner, an Ojai tennis tradition that goes back decades!