Jackie and Carol Cai were unable to continue their fairy-tale run in CIF Individuals play today. Despite coming up short, it was all smiles for the sisters, as they pushed their more experienced opponents and proved beyond doubt that they are one of the best doubles teams in the strongest high school section in the country.

The Cate duo faced tournament #2-seed Emily Ackerman (senior) and Chloe Bendetti (junior) from Oaks Christian. Bendetti was no stranger to the big show, having reached the finals of last year’s tournament, and Ackerman will play for Cal Poly SLO next year, an NCAA D1 program. Both players are ranked in the top 150 players in the country for their classes.

Experience was on display, as the Oaks Christian team jumped out to a 5-0 lead in the first set. Serves to the corners and crisp volleys punctuated nearly every point and to the casual viewer, the match may have appeared like a formality.

Unfazed, Cai and Cai battled back by winning the next four games and had some opportunities to draw even in the tenth game before a missed poach ended the set.

The surprise was palpable on the faces of the Oaks Christian coaches and fans sitting courtside and frustrations became visible on-court as well. “These Cate girls are here to play” was the obvious signal.

After dropping the first set 4-6, the sisters jumped out to a 2-0 lead in the second, with a quick break of Ackerman’s serve and a textbook hold of Carol’s serve. Bendetti held a tough service game with a clutch corner ace to stem the bleeding and again the momentum shifted.

The Oaks Christian pairing hit a hot streak and rattled off four straight games to regain control of the match, as the Cai’s had a dip in energy. The final few games were fairly evenly contested, but the second set went to Oaks Christian 6-3.

While this was the last stand for Jackie Cai, a senior, Carol will have two more opportunities to improve upon this year’s performance. As has been the case in recent years, every season at Cate has brought a new level of success, and with returning players like Carol and the knowledge passed down by outgoing players like Jackie, the team looks primed for another great season in 2018! 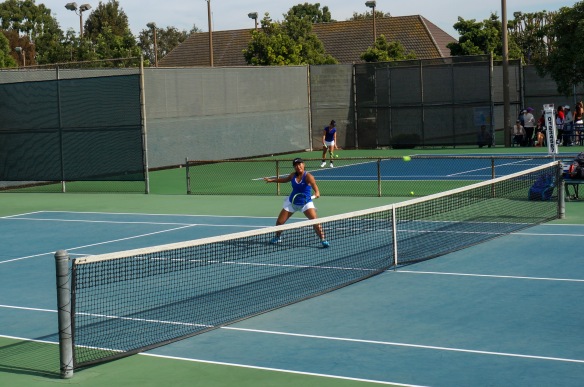