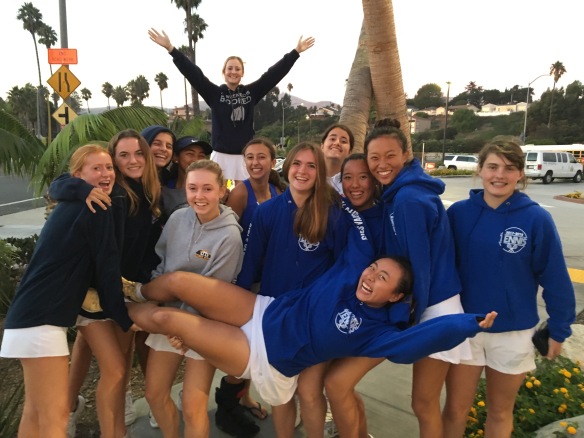 Cate Girls’ Tennis has been very busy over the last week, with more to come this weekend. Here’s a look at what’s been going on in league play, ahead of this weekend’s Cate-hosted, prep-school tournament:

Cate Girls’ Tennis moves to 4-0 on the season with a 13-5 victory over prep school rival Thacher. It was the first Tri-Valley League match for Cate, continuing an unbeaten streak in league play that goes back to the 2015 season.

One player who has had to play the waiting game to see action in match-play is junior Carol Cai. Already amongst the top doubles players in Southern California, based on her results in last year’s CIF Individuals, Cai had to sit out the first two matches of the season, still recovering from a shoulder surgery.

Sarah Polowczak and Fritze Mayer moved to 12-0 on the season, coasting to 6-1, 6-0, 6-1 victories through their textbook doubles play.

Kate Tunnell and Madeline Vanica went two-for-three on the day, including a victory over the top Thacher team in the second round. Jennifer Soh and Yuki Kobayashi fought gamely to 5-7, 3-6 losses in the first two rounds-of-play before finally landing a win 6-2 in the third round.

Coach’s Thoughts:
“This was our best match of the season so far. We have still yet to field our top-9 players in the same match together, but every player in this varsity program has shown a readiness to step up when called on.”

“In addition, today Carol proved not only that she is approaching full fitness, but also that she’s got what it takes to be a dominant force in singles play. As a coach, having a player like Carol who can play at a high level in any position is a real luxury.”

The Cate Rams took to the home courts against TCAA rival La Reina for their second TVL match of the year.

The Rams had an outstanding team effort led by Sarah Polowczak and Fritze Mayer who were unbeaten on the day at #1 doubles. Sydney Burton was unbeaten at #2 doubles, pairing with freshmen Aminah Hill for two sets and Ashi Kamra for the third.

On the singles side, Grace Fuss, Carol Cai and Yuki Kobayashi all took two sets from the Regents.

Cate Girls’ Tennis won a 13-5 contest against Foothill Tech at Ventura College to remain unbeaten on the season.

In singles, Grace Fuss went 2-0 before stepping aside for freshman Ashi Kamra, who completed the line one sweep with a 6-1 victory in the third round-of-play.

Carol Cai lost a tight set to the Dragon’s #2 player 6-7 (5), before recovering to win her next two sets, including a 6-3 victory over the #1 player. Yuki Kobayashi added a win and fought gamely in her two losses on the day.

Sarah Polowczak and Fritze Mayer move to 17-0 on the season with a sweep at the top doubles line for Cate. A mix of three other doubles combinations added four more sets, including two-of-three from junior Mia Foster and sophomore Madeline Vanica.

Coach’s Thoughts:
“I was really pleased with the effort level from all 12 of my Cate girls today. In particular, Yuki played really patient, determined tennis at the #3 spot. Ashi also took a big step forward today in beating the Foothill #3 girl. It’s great to see all members of the team getting the opportunity to contribute…even better when everyone on the team gets a win!”

The Rams are now 6-0 (3-0 in league play) going into the weekend tournament. Details to follow! 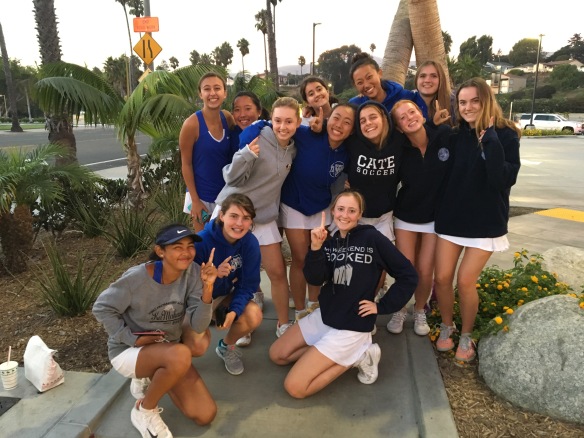