Laguna bounced back from yesterday’s loss with a resounding 13-5 win over Nordhoff High School at their courts in Ojai. The Rangers are currently ranked #10 in CIF D5 and are the defending Frontier League Champions. END_OF_DOCUMENT_TOKEN_TO_BE_REPLACED

During what can only be described as an idyllic day for tennis, the Laguna Blanca boys’ team got it’s season off to a solid start with a 13-5 win today against Coast Union.

Laguna dominated singles play, winning 8-of-9 sets. Senior Phillip Hicks and sophomore Alex Furukawa both swept, while freshman Andrew Tolles added two wins.
Tolles and Furukawa are fresh off the soccer team’s 2nd round loss in CIF playoffs yesterday, meaning they didn’t even get to practice before the match! Now that they’ll be on-court every day together, these three will be an increasingly dangerous starting singles lineup as the season progresses.
In doubles, sophomore Jason Barnick had an outstanding day, winning his first two sets with partner Kylan Tyng and adding a third set win with partner Kelvin Chen. Barnick dropped just 1 game in three sets of play.
Senior Atty Roddick and sophomore Victor Liu came up with 6-1, 6-0 wins along with a close 4-6 set against the Coast Union #1 doubles team. Jack Stein and Eric Chen also had their talons out in their first matches together, coming close to victory in three 4-6 sets.
Laguna boys’ tennis plays next on March 1st at home against St. Bonaventure High School at 3pm. We hope to see you out there! 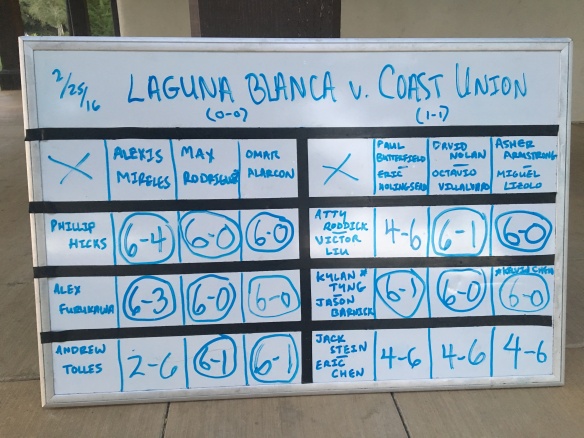 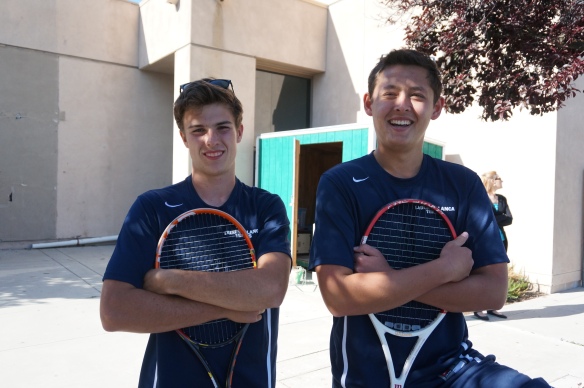 Now that the season is a few weeks in the back mirror, I want to take a moment to reflect on our success.

CIF has released the playoff pairings and all-in-all I think it looks promising. Tomorrow, we’ll travel north to Templeton to play the Los Padres League #2 seeds. With a victory, we’ll make the main draw, where Buckley awaits an opponent on Wednesday. Here’s a look at final division seedings and the draws:

Templeton has long been a distant second to Santa Ynez in the Los Padres League, but this season they keep much closer to league victory. On April 14th, Santa Ynez won an 11-7 match with a clean sweep of the doubles and two wins in singles. Templeton will be led by senior Jarred Hall, a tournament-level singles player who recently finished runner up to PJ Marymee (Santa Ynez) in their individuals tournament. With junior Phillip Hicks (pictured at top) hitting form at just the right time and a solid lineup from top-to-bottom, we should have all the answers.

Looking ahead to a second match, Buckley is a private school in Sherman Oaks that has recently been moved back down to D4 from D3 last season, so they may be a bit under the radar at #8-seed. In fact, they are entirely under the radar, since there is not a single report in a newspaper or website about any of their matches this season. It’s just as possible that, without exposure to many teams outside of their league, Buckley might yield Laguna the #8-seed spot in the draw on Wednesday, leading to a potentially easier quarterfinal round.

First thing is first, though, and that first thing is in Templeton at 3pm tomorrow. Riding a streak of 11 wins in our last 12 matches, I like our chances. 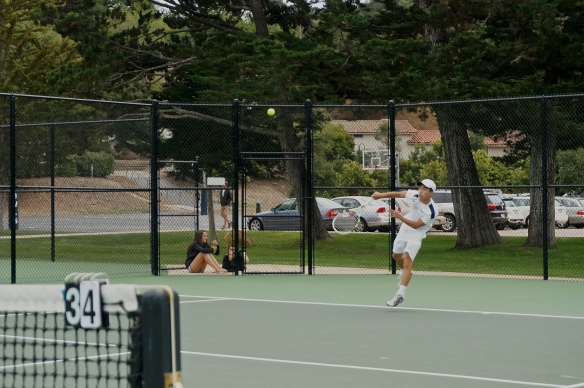 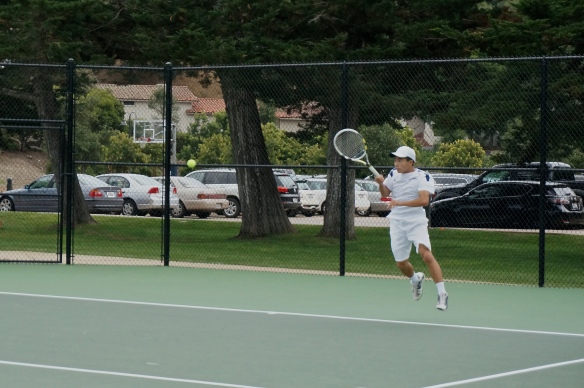 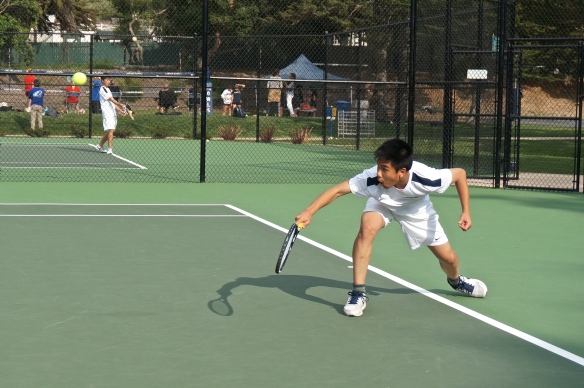 The whole team got involved in the action today, with all 13 members playing during the match at the Dunn School in Santa Ynez. It was a far cry from our first match of the season, where we could only field seven players, two of which had not yet learned to keep score.

Leading the way for the Owls were Atty Roddick (pictured above), Phillip Hicks, and Ethan Tyng, who partnered with different teammates throughout the matches en-route to 3-0 records on the day in doubles. The Laguna doubles lineup, in fact, went undefeated on the day.

In singles, senior Connor Elmore picked up two wins and sophomore Henry Farrell (pictured below) added another in one set of play before being subbed out.

We are now 7-3 and will play again today at home against St. Bonaventure High School at 3pm. As a freelance team (not part of a league), CIF requires us to play a minimum of 16 matches to be eligible for playoffs. In addition, we must have a winning record to be considered for selection and must have an 80% win-percentage to get an automatic bid.

Doing the math, that means we have a chance to automatically qualify if we go undefeated in the last six matches of the season. Our hopes of achieving this goal have been buoyed recently by the addition of freshman Ethan Tyng and senior Cooper Farrell, as well as sophomore Kelvin Chen. The three newcomers accounted for five of our 12 sets yesterday and they figure to improve with regular practice. In addition, we are expecting the return of our wayward thespian, Mitch Gravelle, who provided a boost to the roster in the early part of the season.

One of the challenges of a 10-week season is getting to the end of it with the team intact and firing on all cylinders. I believe we are poised to do just that, making us a potential outside contender if we can just claw (or “talon”) our way into the CIF playoff picture. 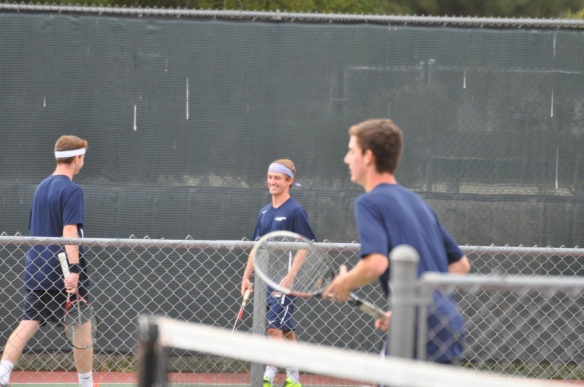 *Thanks to Kristin Tyng for providing most of the photos for this post!

Last Friday, Laguna picked up a decisive win against Dunn without our usual #1 singles player. Henry Farrell and Alex Furukawa led the charge with sweeps in singles and doubles was dominant as well.

On Tuesday, we faced Bishop Diego and their star player Spencer Ekola. Despite being unable to make any headway against the NCAA-bound player, Laguna came out with a 14-4 victory. Jason Barnick and Kylan Tyng swept in doubles, and Martin Barnick paired with Mitch Gravelle for a win and then helped Eric Chen gain his first two victories in high school tennis. Atty Roddick and Connor Elmore were dominant in two sets before a third-round substitution that saw Erik Qin come to within a few points of his first win of the season (paired with Elmore).

Yesterday we faced the Cate School, a familiar opponent from the former Condor League. Although an early departure of the London spring break trip meant we had to forfeit three sets right off the bat, we battled to a 6-12 final score against last year’s CIF semifinalists.

Alex Furukawa and Henry Farrell paired for two wins in doubles and a close third set against Cate’s #1’s, while Barnick/Gravelle and Elmore/Roddick each added a set to the total. In singles, Phillip Hicks fought admirably against the big one-two punch of Kevin Ha and Jason Xiao, before getting a quick win at the #3 spot. Kylan Tyng reversed his fortunes from a week ago to take an exciting tie-break win against the #3 player as well.

As we enter spring break, Laguna boys’ tennis can feel pretty good about the current state of affairs. With a 3-2 record, and several of the toughest opponents of the season out of the way, April looks promising if we continue to improve. 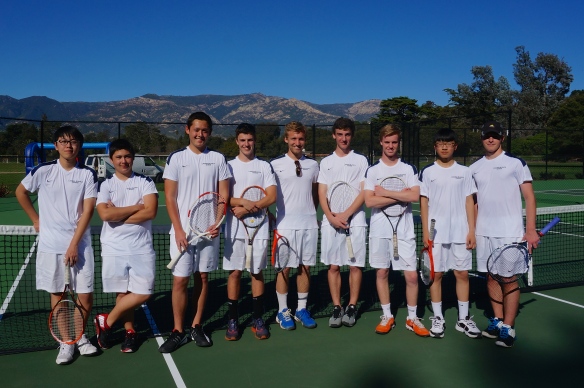 It’s been a crazy first two weeks of tennis this season, with a number of our players being part of playoff teams for winter sports. After rescheduling the first two matches of the season, we decided to just dive in regardless of the soccer team’s impressive run to the CIF Championship game tonight.

On Wednesday, we beat Oxnard High 12-6 on the back of sweeps in singles from Phillip Hicks and Alex Furukawa. In doubles, senior Martin Barnick paired with Connor Elmore for a sweep, while Atty Roddick and Jason Barnick picked up two wins as a doubles team. Kylan Tyng came through with a solid win against the Oxnard #3 in the final round of play.

Today we faced San Marcos High without two of our top three players and came out one set better than last season with a 5-13 result. Seniors Martin Barnick and Mitchell Gravelle claimed a doubles sweep with 6-4, 7-5, 6-2 scores in an impressive first appearance together. Connor Elmore and Jason Barnick also played a strong three rounds, taking a win over the San Marcos #3 team by a 6-4 score and playing two more close 3-6 sets. Phillip Hicks added a 6-2 win in singles.

Next week we will face perennial rival Santa Ynez on Wednesday and then Dunn School on Friday. Both of these matches will be played at home on the new Laguna Blanca Furukawa Tennis Facility. 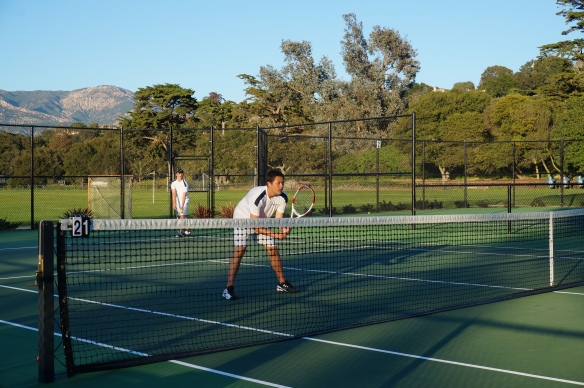 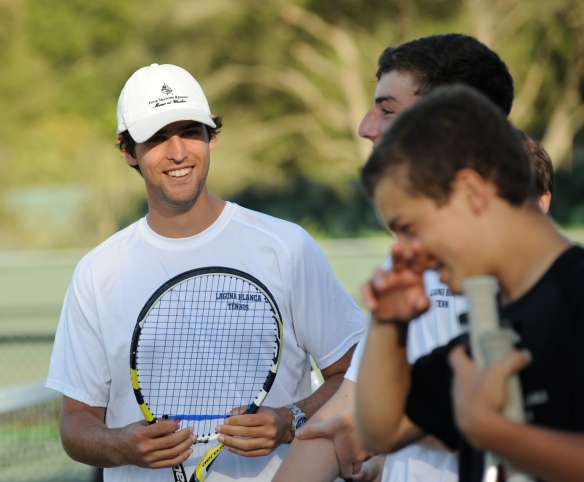 In my first five years at Laguna Blanca as boys’ tennis coach, I’ve had the opportunity to be part of an impressive turn-around in the program. In 2009, the team finished 1-11 on the season, with their only victory coming against an all-freshmen squad from the newly opened Orcutt Academy.

Since that time, we’ve steadily progressed and become a consistently top-10 ranked team in CIF Division Four. In addition, we now have an impressive tennis facility on-site, which makes the draw of Laguna’s tennis program all the more alluring from a sporting perspective.

With the new norm of sporting success, it’s easy to forget that we are not just a strong athletic program, but that graduates of our program are equally successful academically. END_OF_DOCUMENT_TOKEN_TO_BE_REPLACED

Well, there’s no denying that Laguna is on the playoff map. In the last two years we’ve not only made the playoffs, but also won a round. As with last year, this year’s second round opponent proved to be an underrated adversary. END_OF_DOCUMENT_TOKEN_TO_BE_REPLACED